This colorless and odorless gas escapes from faulty furnaces, as well as portable generators, stoves, lanterns, gas ranges and other sources. When the fumes enter an area lacking adequate ventilation, they become lethally dangerous. In fact, it’s the biggest cause of poisoning in the U.S. according to Mass.gov . 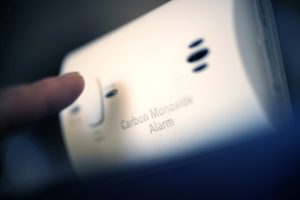 In November, NECN reported that a Lawrence, Massachusetts, family of seven had to be hospitalized after becoming poisoned with carbon monoxide. The problem began when the furnace in their home malfunctioned and the oxygen levels inside dropped.

The results weren’t immediate. Over two days, the family suffered from the common symptoms of carbon monoxide poisoning: disorientation, headaches and more. After summoning help, the family was taken to an emergency room where the staff was surprised there had been no deaths.

“All seven of us could have been fatal,” said one family member.

Steps You Can Take

Fortunately, there is plenty you can do to protect yourself this season. Here are some tips from the above sources, as well as a flyer from the Commonwealth of Massachusetts:

You can also hire a vendor to install an environmental detection system, with monitoring services. Right here in New England, American Alarm installs detectors and provides 24/7 carbon monoxide monitoring. Time and again it has warned its customers about CO outbreaks, as the following examples illustrate: