Knowledge is power when it comes to home and property safety here in New England. We recently published a report based on a five-year study of our archived verified-alarm data, and some interesting patterns emerged. 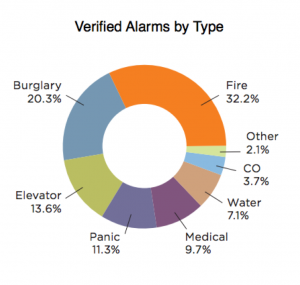 The results include some eye-opening statistics:

Given fire is the number one threat to property, we’ll look at it a little more closely to gain some insights. First, we saw a total of 536 alarms during the period studied. (For more insight, we also offer small summaries of the fire alarm events, including location, time, cause and outcome.)

As is to be expected in the Northeast, the jump in fires was typically caused by winter-season home heating system problems, including furnace malfunctions and chimney blazes. Other fire sources were caused by wood stoves and space heaters. 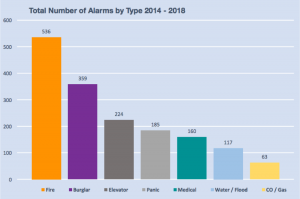 Still other alarms were set after frozen pipes burst and triggered a fire alarm sensor. Such events were so frequent in New England that they accounted for 22 percent of all fire alarms. Interestingly, the most common time of day for a fire alarm was noon (nearly 40 events), while the least likely times for an alarm were 4 a.m. and 6 a.m. (roughly eight each).

Fire and theft are real threats. Protect yourself from these (and other dangers) by using monitored security and surveillance/sensing systems. If you want that extra layer of protection, talk to a Security Consultant today.