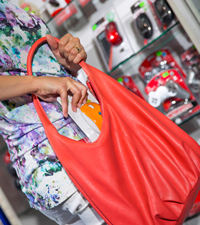 In 2013, Boston police responded to over 8,000 complaints of property crime, according to the FBI’s Uniform Crime Report (UCR). This equates to over 20 incidents per day and doesn’t indicate how many of these reported crimes led to arrests. What’s more, statistics can’t account for shoplifting and other property crimes that go unreported or unnoticed.

It’s no surprise that small businesses are feeling the pinch with profit margins slimming and high-value items disappearing thanks to five-finger discounts. How can you stop the shoplift?

Consider the recent arrest of a South Hadley man who stole almost $600 in cigarettes during a late afternoon crime spree. His method: ask for two cartons of cigarettes (valued at approximately $100) then walk away without paying. Police were first tipped off by a Cumberland Farms location just after 4:00 pm, by a Sunoco station at 4:30 and finally a Shell at 7:35 pm.

Descriptions provided by staff gave police enough to track down the criminal’s vehicle and arrest him. This time, the good guys won but there are a few points of note: the man had two other shoplifting convictions, and these robberies all took place in broad daylight. With criminals getting bolder and not afraid of repeat performances, New England companies need every advantage possible.

How can businesses protect themselves against these kind of threats? It starts with a solid set of best practices. Cartons of cigarettes, for example, should never leave store shelves until payment is made. More importantly, however, are the use of intelligent business security systems to monitor retail premises, record critical footage and enable playback on a variety of devices.

Of course, it’s easy to view the South Hadley example as one of human rather than electronic triumph, but there’s a catch: while our cigarette thief was arrested immediately, he hasn’t been convicted. A large part of the prosecution’s arsenal in this case will rely on eyewitness testimony of workers and store patrons — testimony which according to Scientific American is notoriously unreliable.

To combat this problem, businesses in New England require integrated video security systems which do more than just record and play back. By making security part of IT infrastructure and tying systems into everything from burglar alarms to access control systems, owners gain the upper hand. Whether it’s internal till-based theft, a clandestine nighttime break-in or career shoplifter trying to score big, the right security system means companies are always prepared to respond, report and replay.