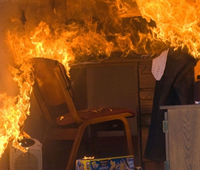 During the last academic year, seven students were killed in fires in off-campus housing nationwide, including Boston University student Binland Lee, a senior studying marine science, who died in April in a off-campus fire in Allston, Mass. Fifteen others were injured in the blaze, including two other BU students.

The blaze, which broke out at 6:30 a.m. on April 28, destroyed a three-story house at 87 Linden Street and injured nine residents, including two other University students, and six firefighters. It was caused by caused by someone carelessly disposing of smoking materials.

When firefighters tried to get into the house through the front door to fight the fire, they discovered there was inside stairway to get to the second floor.

That meant firefighters had to go outside, to the back of the house and extend lines up an exterior wooden stairway to the second floor. Additionally, there was no way to get the third floor from the outside because of the inside stairway, according to Campus Firewatch.

Every year college students across the country – both on- and off-campus – are involved in hundreds of fire-related emergencies, according to the U.S. Fire Administration (USFA).

Overall, most college-related fires happen because students aren’t aware of fire safety and prevention. So it’s important for off-campus students to understand the fire risks and know the preventative measures that could save their lives.

The USFA offers a list of questions students and/or their parents should ask potential landlords before signing a lease and/or moving in. Additionally, students should ask those questions now if they haven’t already.