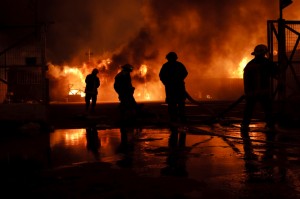 The U.S. Fire Administration (USFA) reports that arson is the cause of nearly 17,000 fires each year. In 41 percent of cases the targeted building is vacant and the large majority of intentionally set fires focus on residential buildings. The purely random aspect of arson is what makes it so dangerous, especially when fires are left to burn long after arsonists flee the scene. What starts in vacant buildings can quickly spread to nearby homes and businesses — and while Shantey Nared now faces justice for his crimes, many other fire-setters go unpunished.

On May 25th, Springfield police responded to a burglar alarm at the Computer Recycling Center on the 1400 block of National. Upon arrival they found no sign of forced entry but noticed a plume of smoke coming from the building and called for a fire crew. Thanks to the tripped alarm — perhaps by heat, pressure, or simple malfunction — the Center was spared complete destruction. In this case the business alarm system pulled double duty, but there’s no guarantee of another save if the building catches fire again.

Arsonists. Random attacks. Burglar alarms standing in for dedicated fire systems. What does it all mean for New England business and homeowners trying to protection their property?

Start with the basics: hard-wired smoke, heat, and hazardous gas detectors all routed to a 24-hour security monitoring center. Or take it a step farther with specialized HVAC duct sensors to ensure the earliest possible warning in case of fire.

Arsonists in New England aren’t afraid to torch buildings in broad daylight, and once alight fire has a mind of its own. With the right detection and monitoring systems in place, however, businesses and homeowners can turn down the heat.