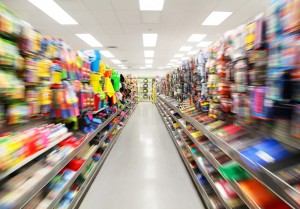 Crime doesn’t always pay. In Concord, NH, police recently arrested a group of four women who stole more than $1000 worth of merchandise at a local Walmart. This is just the tip of the iceberg—with the cost of retail crime up 27 percent over the last year, how do companies keep losses down and items on store shelves?

Describing it as “retail criminal enterprise”, the Concord Patch notes that the ringleader of the Walmart theft group was arrested on four counts of organized retail crime enterprise, three felony counts of theft by deception and a single felony of theft by unauthorized taking or transfer. The group established a simple pattern of theft: One would select an item from the store and then bring it to Charter who was standing in line at the customer service desk. Then, she would exchange the stolen item for a Walmart gift card.

Police were originally contacted by loss prevention officers who were able to identify one member of the group, Christina McIntyre. By the Walmart staff had trouble determining the identity of the woman waiting in line, until police officers took a look at the store’s video footage and quickly recognized Charter. Now, the entire group has been rounded up and faces a host of charges. Here, good camera positioning and high-quality IP video network footage enabled police to put an end to the shoplifting spree, but are there other ways for companies to protect their interests?

Retail businesses in Massachusetts can take a number of steps to help theft-proof their assets. First is effective use of technology; video cameras and access control systems help limit the amount of after-hours crime and help catch criminals who choose to commit these acts during the day.

In addition, companies can make better use of trained in-house staff. For example, it’s often a good idea to put one or two “plain clothes” loss prevention officers out on the floor of large retail enterprise who can scan the area for potential threats and keep tabs on possible shoplifter. Once thieves exit the store, employees can approach and demand the return of stolen items. Outside cameras also provide a viable way to catch criminals by recording license plates and then relaying this information to police.

Bottom line? Thieves will always target retail businesses, and not every item can be caught before it leaves store property. By leveraging a combination of technology and training, however, it’s possible for local companies and big box stores alike to cut down on total losses—and provide the information needed for police to break up active criminal groups.