One of the fastest growing crimes in the United States is scrap metal theft. Thieves looking for a fast buck are stealing copper, aluminum, nickel, stainless steel and scrap iron from any number of businesses. 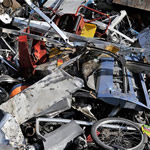 For example, in February a Nashua, New Hampshire man was charged with stealing a scrap-metal bin containing 20,000 pounds of scrap metal from a recycling company, according to an article in the New Hampshire Union Leader — and police believe the alleged thief is also involved with the thefts of scrap metal bins from other locations.

Even more recently, police in Charlton, Mass. arrested two men they allege stole scrap metal from a railroad year, according to the Telegram & Gazette.