In 2010, one home fire was reported every 85 seconds. Those fires in 2010 caused about 13,350 injuries among civilians, 2,640 deaths and resulted in $6.9 billion in damage, according to the National Fire Protection Association (NFPA).

Since 1990 cooking has topped the list as the number one reason for fires, while heating equipment was the main reason for fires in the 1980s and still  as the second cause of fires. Smoking materials, electrical equipment and candles are also high on the list of the reasons fires start. 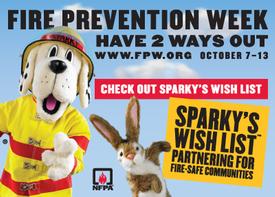 Organizations like the National Fire Protection Association and fire houses across the country recognize Fire Prevention Week to remind people of these statistics and as well as to talk to them about fire safety.

Fire Prevention Week, which falls on October 7-13 this year, commemorates the Great Chicago Fire, a fire that has always been blamed on a cow. Legend has it that Mrs. Catherine O’Leary’s cow knocked over a lamp, which ignited a fire in the barn, which then started the entire city on fire.

More recent research has debunked that as the original cause, but the cow story still resonates today. The tragic Chicago fire left 250 dead, 100,000 homeless and damaged 17,400 buildings and over 2,000 acres, notes the NFPA.

The Chicago fire, along with a forest fire occurring in the same year in Peshtigo, Wisconsin, caused fire officials to take the issue of fire safety more seriously. When the 40th anniversary of the Chicago fire rolled around, the Fire Marshals Association of North America commemorated the date as an occasion to inform people about fire safety.

President Woodrow Wilson signed the first National Fire Prevention Day proclamation in 1920. And since 1922, the week in which October 9th lands has been designated as Fire Prevention Week. October 9th is significant because while the Chicago fire started on October 8th, most of the damage was sustained the next day.

The goal of the NFPA, which was established in 1896, is to reduce the number of fires worldwide as well as address fire hazards by providing education, research, training and advocating codes. Much of the international nonprofit organization’s work is focused on education. The NFPA has been the official sponsor of Fire Prevention Week since 1922. Sparky the Fire Dog, the NFPA’s official mascot, is associated with much of the organization’s outreach programs.

How to Get Involved

How much do you know about fire prevention? Take the quiz!

Sparky’s Wish List serves as an online registry that brings together fire departments and community members to support life-saving fire safety education programs. Fire departments across the country provide a list of needed items for Fire Prevention Week, and businesses and other individuals in the community can purchase and donate the items. The NFPA has a tool on its website to help you find the wish list for the fire departments in your state.