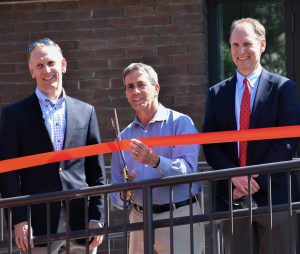 “This is a great day for our team and the customers we serve,” said Wells Sampson, president of Electronic Alarms’ parent company, American Alarm and Communications. “This is an investment in the city that’s been our home from the very beginning. It’s also an investment in the future, to expand our capabilities to protect people and property across Rhode Island and southern New England.”

Electronic Alarms’ new security center has an open-concept suite of offices and work-stations, a conference room and a training center that seats up to 30 people. It has a warehouse and logistics staging area, a kitchen and breakroom for staff. The design features vibrant colors and many interior glass walls to allow natural light to flood deeper into the building.

The project was designed prior to the COVID-19 pandemic, however during construction several modifications were made to adapt the space, including higher partitions between work areas and the installation of an air purification system for the building. The new facility more than doubles the size of Electronic Alarm’s former Warwick location.

“Since 1969, Electronic Alarms has been an outstanding neighbor. I am extremely pleased that when they decided to expand their business, they chose to stay here in the City of Warwick which they consider their home. We wish them nothing but continued success,” said Mayor Picozzi.

Electronic Alarms was founded in 1969 under the name Electronic Alarm Systems, as a father and son business operating out of the Guzeika family’s garage in Warwick, Rhode Island. In 1980 the company moved to a new purpose-built building on West Shore Road in Warwick, where it would remain for more than 40 years.

American Alarm and Communications is based in Arlington, Massachusetts, and has had a significant presence in Rhode Island since the early 1990s, primarily through its acquisition of Electro Systems of Fall River, Mass., which served many customers in the Ocean State, with a concentration in the Newport area.

In 2012, Electronic Alarm Systems, and its commercial fire division Phoenix Fire Alarm & Communication, were acquired by American Alarm and were rebranded as Electronic Alarms. Today, that division has 23 employees, including 12 security systems technicians, focused on serving Rhode Island and southern New England.  Henry Guzeika Jr., whose father and grandfather started the company, remains with Electronic Alarms as a security systems consultant, specializing in applying advanced security technologies and designing integrated systems for customers.

Deslandes Construction of Warwick was the general contractor for the building project, and Robinson Green Beretta Corporation of Providence was the architect. Jeff Johnston, branch operations manager, and Betty Beachy, office manager, at Electronic Alarms led the construction management effort on behalf of the company.

“With this awesome new center, our Electronic Alarms team will be empowered to grow and to continue providing the best-in-class security systems and services that our customers expect,” said Louis Sampson, chief operating officer of American Alarm.