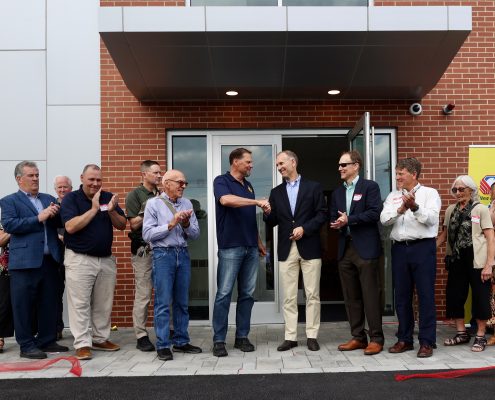 Weymouth Mayor Robert Hedlund and other community leaders joined the celebration on July 14, helping the American Alarm team cut the ribbon on a $3 million renovation of its 14,500 square-foot building on Washington Street.

American Alarm bought the building in 2016 through the acquisition of Atlas Alarm Corp. which had operated in Weymouth since 1945.

“This building was really showing its age. We considered downsizing to a different, newer building, perhaps even moving to another community, but we preferred to stay rooted in Weymouth,” said Wells Sampson, president of American Alarm. “So, we decided to go all-in for our largest ever building investment, and the results speak for themselves. This is a first-class space for our team, and for the customers they serve.”

The building was gutted down to its structural members and re-built. It has all new mechanical systems, plumbing, insulation, windows, and technology infrastructure. The building is now ADA compliant, with an elevator to the second floor. The façade, parking lot and landscaping were all updated.

“I drive by this building every day, and it’s been great to see the construction progress,” Mayor Hedlund said. “We are very happy to keep an excellent company like American Alarm in Weymouth.”

American Alarm now occupies the first floor, with updated and expanded offices, conference and training spaces, a product warehouse and the company’s back-up 24-7 alarm monitoring station. The second floor of the building will be leased for professional office space.

“The work took a bit longer than we hoped, given the supply chain issues that we all read about, but in the end, it all came together in a spectacular way,” Sampson said. “This project is an investment in our future, giving American Alarm room to grow, which we certainly need. And by the way, we are hiring!”

Wells said the company is recruiting now for electricians, technicians, staff for the 24-7 alarm monitoring center, and people interested in the company’s technical apprenticeship program as a pathway into the security systems industry.

“This is a great day,” said Louis Sampson, chief financial officer at American Alarm. “We look forward to growing and being part of this community for decades to come,”

American Alarm provides security services, including 24-7 alarm monitoring for all the municipal buildings in Weymouth, including the public schools. The company also provides security services for most of the municipal buildings in nearby Braintree, Rockland, Randolph, Abington, and Avon, in addition to several thousand homes and businesses in the region south of Boston.