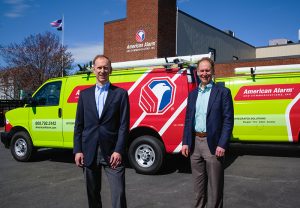 Arlington, MA — American Alarm and Communications today announced it has completed the acquisition of Phoenix Security Systems Inc. of Wilmington, MA, which provided security, access control, fire alarm, and video surveillance systems and services for more than 800 businesses and homes, primarily in the metropolitan Boston and south shore areas of Massachusetts.

“We’ve been friendly competitors for a long time, and we believe that uniting our two companies is a great step forward for both, and more importantly, for the customers we serve,” said Louis Sampson, chief operating officer and co-owner of American Alarm.

Phoenix Security Systems was established in 2007 by Brad White, who built a significant portfolio of residential and commercial customers, including several multi-site corporate accounts. Phoenix grew primarily through referrals, because of their excellent reputation for quality systems and service.

“Our mission at Phoenix has always been to do our best for our customers. After considerable thought, I knew the time had come to add the resources we need to keep serving customers at the levels they deserve,” White said in a letter to Phoenix customers announcing the acquisition. “That’s why American Alarm is the right partner for our future.”

“Brad is certainly no stranger to our team,” said Wells Sampson, president and co-owner of American Alarm. “In fact, he’s helped train many of our technicians over the years. So, we know this is going to be a great fit and we look forward to working together to serve Phoenix customers with the technologies, services, and 24-7 support they need for many years to come.”

Earlier in their security careers, soon after each earned their Systems Technician License in Massachusetts, Wells and Brad (together with a couple of other industry colleagues) co-founded a training program through the Massachusetts Systems Contractors Association (MSCA), the state’s trade group for electronic systems including security, life-safety communications, and automation. At that time, both Brad and Wells knew, first-hand, there was a shortage of qualified, licensed systems technicians in Massachusetts, which was a barrier to growth for the industry. Furthermore, low-voltage systems work was not as well-known as a potential career path for many people, even though it is a fast-growing field with exciting technology. They hoped a new training program with a best-in-class curriculum would help to attract more people to consider the field and also help MSCA companies to develop their apprentices into productive licensed technicians.

The MSCA’s two-year training program they developed prepares people for the state licensure exam. The program has expanded to include curriculum for the Systems Contractors License, and for continuing education which is required for technicians to maintain their licenses. Several hundred people have successfully completed the MSCA training programs to date, helping launch people on their careers, and supporting the industry’s ability to serve customers. Brad was the director of the MSCA training program for some 10 years, and was a preferred instructor for the continuing education courses offered for company technicians at American Alarm.

About American Alarm and Communications
Celebrating 50 years in business, American Alarm was established in 1971 by three engineers who met at MIT. It remains a local, family-owned business now led by the second generation of the Sampson family. American Alarm is a comprehensive security systems integration and monitoring firm providing intrusion, fire, access control, video surveillance, environmental hazard and other related systems and services.

The American Alarm group of companies operates from six locations in New England: Arlington, Auburn, Randolph and Weymouth, Mass., Warwick, RI, and Manchester, NH. American Alarm protects all classes of property, from single-family homes to businesses large and small, to major public and historic venues. The company owns and operates a 24-hour UL listed Five-Diamond Certified central station in Arlington that is solely dedicated to monitoring its customers’ security and life-safety systems.