We know that self-supporting retail technology — with its sensors, devices and big data capabilities — offers us many conveniences. However, basic self-checkout platforms don’t always work well for retailers, here in New England, and beyond. 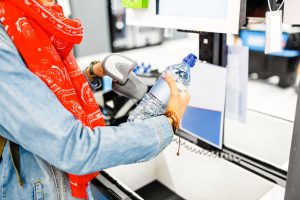 In fact, the Springfield, Massachusetts-based chain of stores Big Y World Class Markets decided it had to remove its self- checkout aisles, according to a Worcester Telegram.com article. In large part, this move was because of the higher incidence of thefts. The article notes that shoplifting is five times more likely at a self-checkout terminal than at a typical human-manned cash register.

Professional thieves often see these systems as offering easy pickings. Even normally honest shoppers may (unconsciously or not) take more than they scan and pay for at the point of sale. In one survey of opioid-motivated thieves, 72 percent of respondents acknowledged they’d encountered anti-theft technology, but that it didn’t really deter them.

In a blog titled “What’s in the Mind of a Retail Shoplifter?” retail analyst Tony D’Onofrio discusses statistics around self-checkout thefts. In a survey of 24 offenders by the Loss Prevention Research Council (LPRC):

And just so that we understand what’s typically most at risk (according to insurance industry BusinessInsuranceQuotes website) the most shoplifted items are:

Even low-cost items add up, given the average “low-level” shoplifter tends to filch some $1,800 worth of items before he or she is caught, says the National Association for Shoplifting Prevention. And overall, the cost of U.S.-based shoplifting totals some $13 billion annually, according to one estimate.

But there are ways to fight self-checkout theft — some of these tips are from an article in the National Retail Federation’s Stores magazine, and other sources cited above. They include:

With these measures, you can begin to make self-checkout pay for your retail operation.