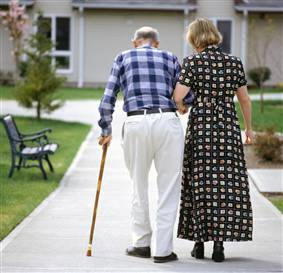 This year we’ve seen the first wave of what has been dubbed the “Silver Tsunami” as the first of 78 million “Baby Boomers” reached retirement age. The number of people over 65 in America will more than double over the next few decades, making up 20% of the total US population by 2050. According to the NPR News Series Aging at Home, a vast majority of those seniors will chose to remain in their own homes when they retire.

Current life expectancy in the US is 77.9 years. With people living longer on average, aging at home can present several challenges that can be worrisome to children whose elderly parents opt out of long-term care facilities. Are they taking all their medications properly? Are they safe and secure from accidents and crime? What if they need help in an emergency? A wealth of home security products has been developed that is answering those questions, allowing seniors to age at home, and bringing peace of mind to their families. Laurie Orlov, founder of Florida-based Aging in Place Technology Watch has said that, “Livability can be extended through the incorporation of telecare and other assistive technologies that are geared toward keeping seniors safe and easing the burden on their caregivers.”

The kinds of products and solutions that Orlov is referring to range from pill reminders, to fall detectors, to fully monitored medical alert systems. District attorneys in Massachusetts recognize that senior citizens are often the targets of burglaries and other crimes because of their perceived vulnerabilities. A fully integrated home security system that includes burglar alarm, fire and carbon monoxide alarm monitoring, as well as a medical alert system can be a great way to help your elderly parents age at home more safely. These features can be installed into any existing home, but as reported in the NPR series, there is a new trend known as “universal design” where homes are actually being built specifically for people who want to age at home.

Either way, keeping your elderly parents feeling as safe and secure in their homes as they made you feel growing up is becoming far less challenging thanks to some innovative new security and monitoring technologies.

https://www.americanalarm.com/wp-content/uploads/2022/12/American-Alarm_logo_1Xr.png 0 0 American Alarm Blogging Team https://www.americanalarm.com/wp-content/uploads/2022/12/American-Alarm_logo_1Xr.png American Alarm Blogging Team2011-11-17 08:55:542011-11-17 08:55:54Safety And Security Systems For Aging Parents, Not As Challenging As You may Think
View All Posts
Subscribe
to this Blog!