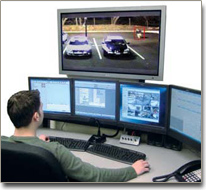 You obviously can’t keep an eye on your business 24 hours a day, seven days a week, but that doesn’t mean you can’t install remote video monitoring to get the job done for you.

Recent advances in business security systems have added an entirely new dimension to the level of protection offered by video surveillance, including the ability to instantly notify both owners and local law enforcement should an intrusion be detected.

That last sentence makes an important distinction between an actual intrusion and one that appears to be on the verge of taking place. In the past, business video surveillance has primarily been used as a tool to help in the prosecution of vandals or thieves after the fact. It offers a record of the criminal activity that took place after the perpetrators gained access to the facility or property in question.

New video surveillance systems take things a step further by sending out digital alerts as soon as suspicious behavior is detected on or near the grounds of a business. The video surveillance system automatically notifies authorities the second that potential burglars or other unwelcome guests trespass onto the private property. That means police officers and private security guards are often able to apprehend individuals before any damage is done.

American Alarm has enjoyed an excellent track record when it comes to protecting customers through the use of this advanced type of business video surveillance. This past summer, for example, American Alarm was able to prevent damage to a $52 million high school construction project in Tewksbury, Mass. after two teenagers broke into the site after hours. The wireless video surveillance system installed at the construction site detected the intrusion and sent a video clip of the teens’ activities to the American Alarm command center in Arlington, Mass. It then took less than a minute for on-duty personnel to contact local Tewksbury police, who dispatched officers to apprehend the duo before any significant damage occurred.

Advanced business video surveillance systems offer the hard evidence required to document a break-in or act of vandalism and successfully prosecute criminals who have acted against a company. But thanks to technological innovation, instant video alerts can also activate a security response to potential criminal activity quickly enough to head off a worst-case scenario before it happens.

These types of video alerts represent the cutting edge of business security, and are worthwhile investments for companies serious about actively protecting their assets through remote video monitoring.