Did you know that only one-third of Americans have both created and tested a fire escape plan? About three-quarters of Americans take the time to develop escape plans, but less than half of those people actually test them, according to the National Fire Protection Association (NFPA). 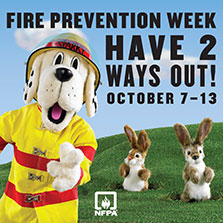 One-third of American households who develop an escape plan estimate they would have at least six minutes before a fire in their homes would become life-threatening. However, they really have much less time to get out, according to a NFPA survey.

Because of the importance placed on escape planning, the theme of the NFPA’s Fire Prevention Week this year is “Have Two Ways Out.” It’s not only important to have a fire escape plan to prepare your family when a fire does occur, but your family must also know what to do if that escape route is blocked by smoke or fire.

Take the 2 Ways Out Challenge with your children >>

Watch this video from the NFPA on Fire Prevention Week resources, including more about the year’s theme “Two Ways Out.”

*Tips have been compliled from lists created by National Fire Protection Association, U.S. Fire Administration and the American Red Cross.