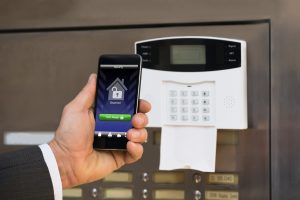 On the fence about installing an electronic alarm system to protect your personal or rental property? Not convinced your security demands such a solution? A home security system can lighten your financial burden, more tightly link your mobile devices to your home management systems, and, perhaps, give you convenience and peace of mind.

It’s possible you own a house in a super-safe neighborhood, with a great police department, and lots of nosy neighbors living next door. Maybe you have a particularly vigilant dog. Perhaps the extra security doesn’t quite move you to install a system. You still owe it to yourself to consider some sort of a surveillance/alarm system’s extra benefits — ones you can enjoy even if you live in Fort Knox.

The 2017 North America home security system market hit $3.9 billion in value (a compound annual growth rate of 23 percent 2010-2017), says a recently released report from ResearchAndMarkets.com. One of the major reasons is the rise of smart device adoption, and their connection via wireless and other network technologies in the house. The press release announcing the survey notes: “Increasing research and development has paved way for internet of things, remote monitoring as well as home automation.”

It’s clear the growing adoption of smart devices and systems is remaking life as we know it — including our domestic arrangements, as a Consumer Reports article notes. Imagine a sophisticated security system, networked with your home’s other sensing and control devices and solutions, such as smoke detectors, climate controllers, and door locks. The entire network can be managed right from your smart phone, no matter how physically separated you are from your house.

Such a combined solutions set can make your home more attractive to certain sophisticated buyers — who will pay a premium to buy it, as The Washington Post notes. The article cites a survey of 22,000 home shoppers. It revealed:

If you’re competing in the market, having an alarm system could be table stakes.

There are other financial benefits: Some experts at the Insurance Information Institute think a protection system a top way to cut homeowner insurance costs. In a brochure, the institute claims that adding a smoke detector, burglar alarm, or dead-bolt locks are worth at least 5 percent off insurance costs. Combined with a sprinkler system and a monitored fire alarm, as well as intrusion detection system (wired so that it alerts police) could result in a premiums reduction of as much as 20 percent.

If you decide to shop around for a sophisticated home protection system, you should use professionals who specialize in electronic security. Because, as with any network, security and reliability are key factors. Sophisticated thieves will attack your home just as they would your computer, so the cyber security should be just as effective as the physical components.